Hanthiyal district deputy commissioner said five excavators, a stone crusher and a drilling machine were buried under the debris. 10-15 laborers are still stranded. Rescue operations are on.

Guwahati: In a tragic incident, More than 15 people are feared trapped in Mauddh in the Hanthiyal district of the country’s north-eastern state of Mizoram on Monday where a major part of the stone quarry collapsed. Officials gave this information. An official of the Mizoram Disaster Management and Rehabilitation Department said that a large part of a stone quarry of a private company suddenly collapsed when the workers were working in the stone pit. No body could be retrieved till late Monday night, while rescue operations by various agencies were on. 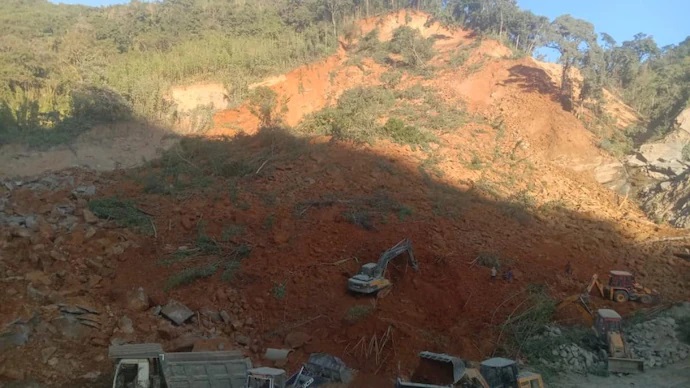 According to reports, according to some villagers of the area, the accident happened when the laborers were returning from lunch break. Hanthiyal district additional superintendent of police Vijoy Gurung, quoting a contractor who oversaw the work in the mine, said that around 12 people were reported to have died. Gurung told the media, the exact death toll would be known after the completion of the rescue operation.

Meanwhile, the disaster management officer said that they are yet to receive a detailed report from the deputy commissioner of Hanthiyal district, but were told that five excavators and other drilling machines were buried in the mine. Another official said that the laborers are mostly from outside Mizoram.

The stone quarry, located about 160 km from the capital Aizawl, was operational for two and a half years. After the accident, disaster management officials, district administration, police and Young Mizo Association people immediately reached the spot and started the rescue operation. State Disaster Response Force, Mizoram Armed Police personnel, Border Security Force and Assam Rifles personnel were also called in to assist in the search and rescue operation. This private company is building a highway between Hanthial and Don village, for which it collects stone from the quarry.