Debina and Gurmeet become parents of the second daughter within 7 months. They gave this good news on social media and demanded privacy. Many celebs like Bharti Singh, Puja Bannerjee shower love.

Mumbai: Debina Banerjee blessed with baby girl second time. Debina has informed fans and friends about this by posting on her Instagram. First daughter was born on April 13. On November 11, she became the mother of the second daughter. The duo announced their second pregnancy a couple of months ago. And they have been blessed with a girl again which is just wonderful. Gurmeet took to his social media handle and announced the happy news. Lianna Choudhary has got a baby sister now!

Many celebs shower Gurmeet and Debina with love
AS soon as Gurmeet and Debina shared the happy news, friends and fans started pouring in love for the couple and showered blessings on the newborn. Mahhi Vij congratulated them while comedienne Bharti Singh said that she wants a baby girl too. On the other hand, Puja Bannerjee called Lianna Lakshmi and the newborn baby girl Mahalakshmi. Kritika Sengar, Sonu Sood, Himansh Kohli and more celebs have showered love on the family of four.

Check out the comments below: 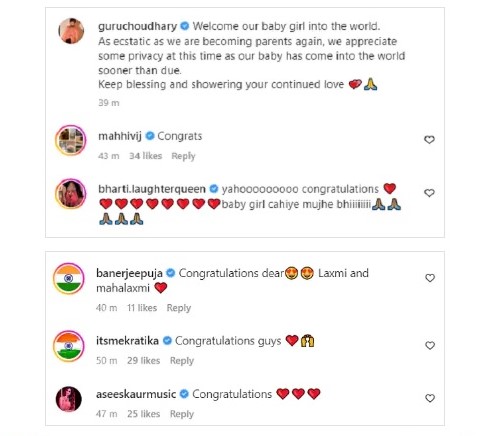 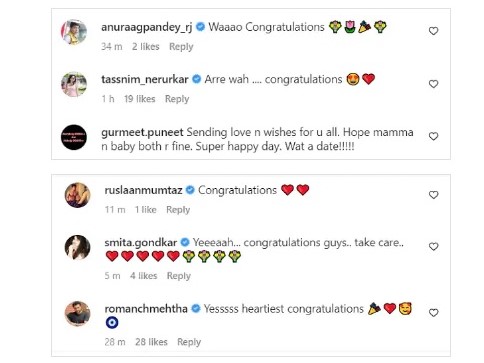 New mom Debina Bonnerjee had shared a Vlog on her YouTube handle. Therein she opened up about her pregnancy. From pregnancy cravings to pelvic pain, sugar level elevation to two fibroids being in her womb adding to her pain and a lot more was revealed by Debina in her vlog. Debina also talked about managing Lianna who is a couple months old and is teething.