Mumbai: Bollywood Actress Kareena Kapoor shares pictures with sister Karisma Kapoor enjoying ‘Maharashtrian meal day. On Saturday, Karisma shared a series of photos and a video of their lunch.In first picture, Kareena Kapoor and Karisma posed with Rujuta for a sun-kissed picture of the trio from their at-home get-together. Karisma also shared a photo of a thali (plate) filled with Maharashtrian dishes. Pictures from their outings often go viral on social media, and fans can’t get enough of them.

Taking to Instagram, Bollywood diva Karisma Kapoor gave a glimpse of their meal via an Instagram post, and wrote, “Maharashtrian meal day.” Both Karisma and Kareena kept their outfits simple and were seen wearing all-white. The second picture shows the scrumptious meal which included Maharashtrian delicacies such as zunka bhakar, ambadi bhaji, kothimbir vadi, solkadhi, and more.

Bollywood Actress Kareena Kapoor shares pictures on her Instagram story. Kareena shared the pictures with captioned wrote, “Rujuta the best love you.” She also shared another post-meal picture that shows Kareena, Karisma and Rujuta sitting together in the living area. She wrote, “Food Coma,” while sharing the picture. 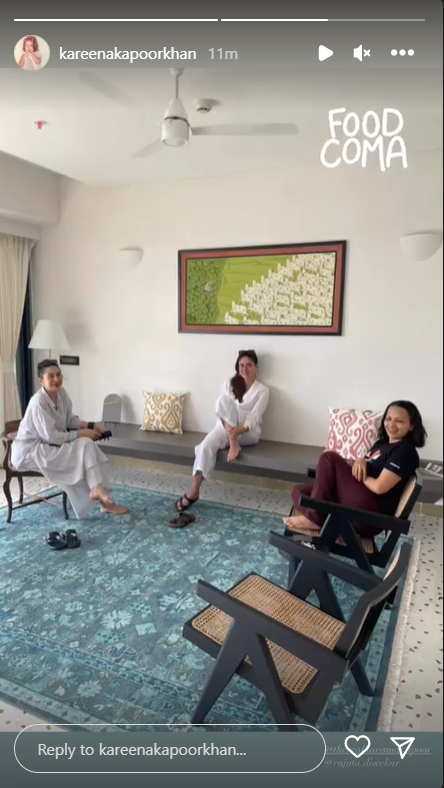 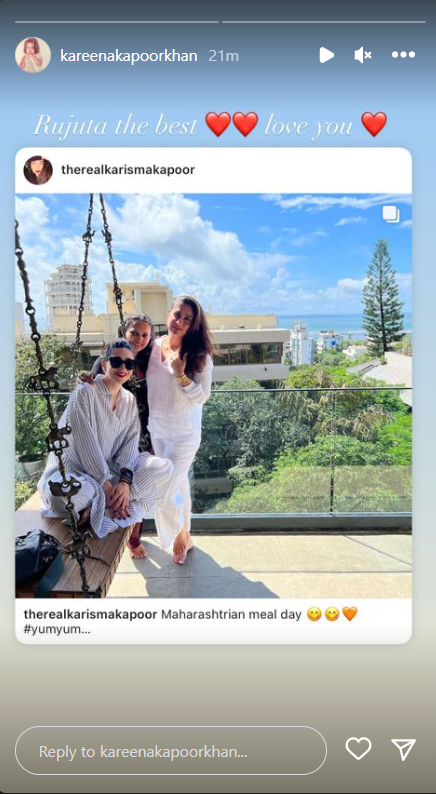 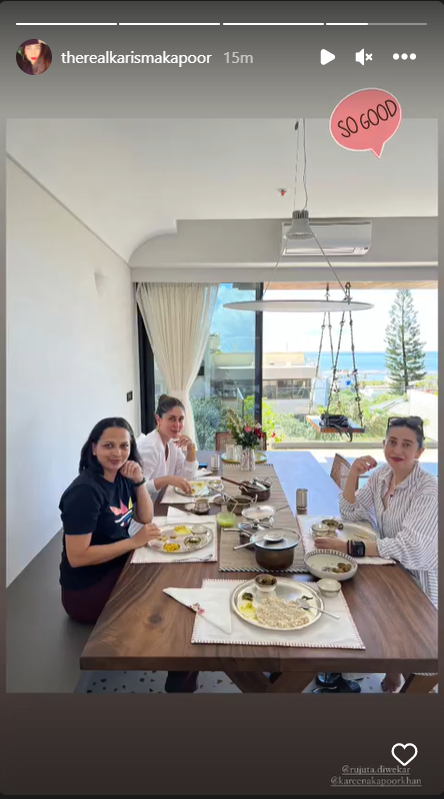 Fans flooded the comments section of Karisma’s post with heart emojis. One comment read, “Yummmyyyy.” A fans also wrote, “Who cooked this?” Some others commented, “Awesome,” and “Wow.”On the work front, Kareena Kapoor Khan will be collaborating with Rhea Kapoor for a fresh women-centric project. She will also make her digital debut with Sujoy Ghosh’s The Devotion of Suspect X, co-starring Vijay Varma and Jaideep Ahlawat.

Kareena has also started prep for Hansal Mehta’s film. The actress will also be making her debut as a producer with the project. On the other hand, Karisma will be a part of the web series Brown- The First case, directed by Abhinay Deo.