Mumbai: Bollywood Actress Kareena Kapoor and her husband Saif Ali Khan celebrated their pre-Diwali bash with her sister-in-law Soha Ali Khan and her husband-actor Kunal Kemmu. Taking to Instagram, actress Soha Ail Khan shared the pictures. The pictures feature Kareena, Saif Ali Khan, Kunal Kemmu and Soha happily posing together. “Love light and laughter. Wishing a very happy Diwali to you and you loved ones Happy Diwali.” She also wished her fans on the occasion.

In the first picture, Soha stood next to Saif Ali Khan with Kareena posing next to him. She rested her head next to Kunal and kept her hand on Soha’s shoulder. Saif had his arms around Soha and Kunal. All of them smiled and posed for the camera. In next picture featured all of them posing in front of a glass window as they stood on a carpeted floor.

Kareena, Soha Ali Khan and Kunal were part of the third photo. The last photo featured Kunal standing next to Soha who sat on a couch.For the occasion, Saif and Kareena twinned in black outfits. While she wore a black and golden suit with red jutis, he opted for a black and red kurta with white pyjama and black shoes. Soha dressed in a yellow suit while Kunal opted for a black ensemble with a red jacket.

On the occasion, Fans also wished them taking to the comments section. A person said, “Happy Diwali to you and your loved ones Dear @sakpataudi ma’am… Stay safe and blessed always.” Re-sharing Soha’s post on her Instagram Stories, Kareena added a ‘family love’ sticker. 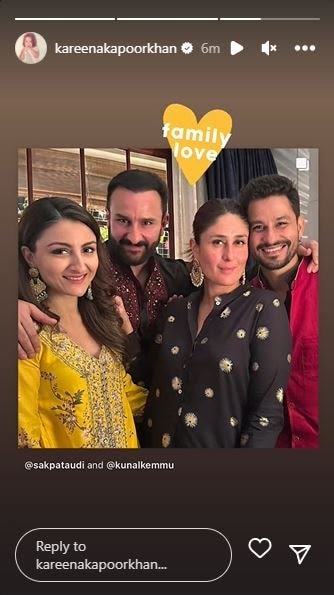 On the work front, Kareena will be next seen in director Sujoy Ghosh’s thriller film which is based on the book The Devotion Of Suspect X. It also stars Vijay Varma and Jaideep Ahlawat. Apart from that, she also has director Hansal Mehta’s next untitled film. Kareena Kapoor was last seen in Aamir Khan’s Laal Singh Chaddha, which released in August.

On the other hand, Saif was last seen with Hrithik Roshan in the action thriller film Vikram Vedha. He will be next seen in Adipurush alongside Prabhas, and Kriti Sanon. Kareena Kapoor and Saif Ali Khan got married in 2012 and they are parents to two sons – Taimur, 5 and Jeh, who they welcomed in February last year.

They have co-starred in films like Tashan, Omkara, Kurbaan and Agent Vinod. Soha was last seen in the web series Hush Hush alongside Juhi Chawla, Ayesha Jhulka, Kritika Kamra, Shahana Goswami and Karishma Tanna. It released on Prime Video in September this year.