Priyanka Chopra shared a sleeping photo of her daughter. In the picture, Malti is lying in a stroller and is looking very cute wearing a white sweater. Priyanka has always been hiding her daughter's face with emoji, but this time she has shown her face.

Mumbai: Actress Priyanka Chopra often shares her pictures with daughter Malti Mary Jonas Chopra on social media, but she has never revealed her daughter’s face. Early hours on Wednesday, the actress has shared the latest picture of Malti and this time also showed the daughter’s face, which is becoming increasingly viral on the internet.

Also Read :- Vikram Gokhale and Amitabh Bachchan struggle together; he reveals that if you want to see real acting, watch Amitabh's film

Priyanka Chopra shared a sleeping photo of her daughter. In the picture, Malti is lying in a stroller and is looking very cute wearing a white sweater. Priyanka has always been hiding her daughter’s face with emoji, but this time she has shown her face. However, the actress has covered Malti’s eyes with a cap while juggling and half of her face is clearly visible. Showering love with the post, the actress wrote, “I mean…” 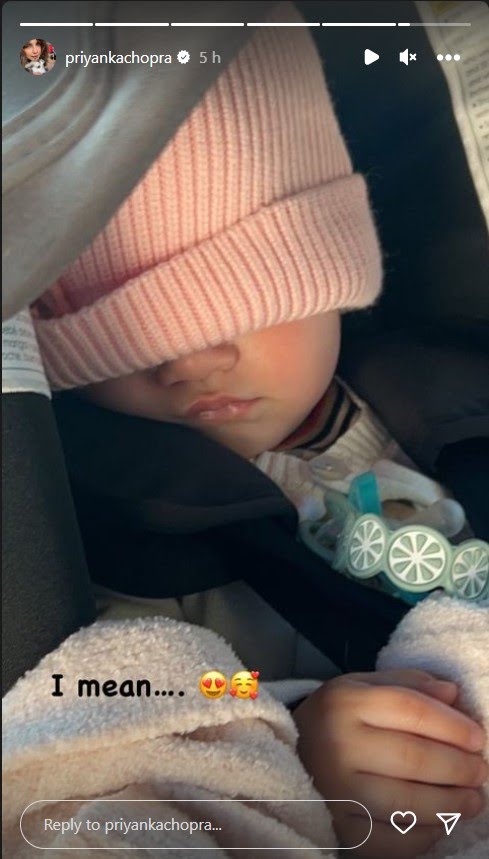 Priyanka Chopra and Nick Jonas had announced their decision to become parents through surrogacy on January 22 this year by posting on social media. They had said, “We are very happy to share that we have welcomed a baby boy via surrogacy. We respectfully ask for privacy during this very special time as we wish to focus on our family.” Thanks a lot.”

Talking about Priyanka’s workfront, she will soon be seen in ‘Ending Things’, ‘Text for You’ and web series ‘Citadel’. Apart from this, she will also be seen working in Farhan Akhtar’s film ‘Jee Le Zara’, in which Katrina Kaif and Alia Bhatt are also in lead roles. Along with this, he also has the upcoming film ‘Sheela’ of ‘Amazon Studios’. In which she will be seen playing the role of ‘Maa Anand Sheela’. Barry Levinson is directing this film of Priyanka. Apart from acting in the film ‘Sheela’, Priyanka has also produced it.

Also Read :- Veteran Hindi and Marathi actor Vikram Gokhale passes away at the age of 77