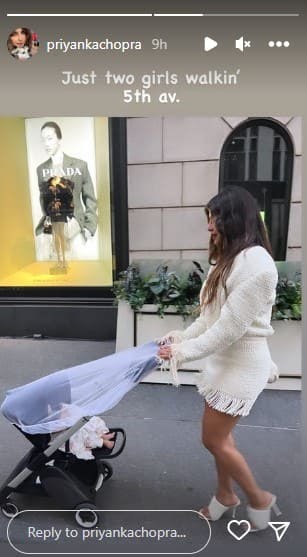 In the picture, Bollywood actress Priyanka looked fondly at Malti as she pushed the stroller. Priyanka wore a cream dress and matching heels. Malti wore a white and pink dress. The actress keeps delighting her fans wih her pictures with daughter Malti Marie, however, she hasn’t revealed her face clearly.

Bollywood Actress Priyanka has many interesting movies in her pipeline. She was last seen in the American film, The Matrix Resurrections, which featured Keanu Reeves, Carrie-Anne Moss, Jada Pinkett Smith, Lambert Wilson, Yahya Abdul-Mateen II, Jessica Henwick, Jonathan Groff, Neil Patrick Harris. Priyanka will be seen in international projects such as `It`s All Coming Back To Me`, and the series `Citadel`. Produced by Russo Brothers, `Citadel` will hit the OTT on Prime Video. The upcoming sci-fi drama series is being directed by Patrick Morgan and stars Richard Madden alongside Priyanka.

She was last seen in Netflix film ‘The White Tiger’ alongside Rajkummar Rao and Adarsh Gourav. In next, she will be starring with Alia Bhatt and Katrina Kaif in Farhan Akhtar`s `Jee Le Zaraa`. It is expected to on floors around September 2022 and will be ready for release in the summer of 2023. It will also mark Farhan Akhtar’s return to the director’s chair after ‘Don 2’.