Mumbai: Today, Bollywood actress Raveena is celebrating her 48th birthday. Actress Anaya Pandey ,Juhi Chawla and others celebrities penned lovely birthday messages for her on Instagram. Raveena had started her film career with Pathhar Ke Phool opposite Salman Khan in 1991.

Taking to Instagram, Bollywood actress Juhi Chawla shared throwback pictures with Raveena Tandon with captioned, “Raaveeennnnaaa !!! Happy Happy Birthdayyyyy to the girl with a big heart!!! You always step forward to support in social and environment matters and here’s a 100 splendid trees to mark this special occasion in your honour!!! Hugs.” She shared one collage featuring nine different reactions of hers and Raveena’s. In second photo, both of them decked up in ethnic outfits. Reacting to their pictures, one fan wrote, “Two beautiful women in one frame.”

Bollywood actress, Ananya Panday shared a selfie with Raveena, where both of them posed with a pout; she wrote, “Happy birthday Raveena ma’am! No one does it like you (wink and gun emoji) @officialraveenatandon.” She shared their photo with Raveena’s song Ankhiyon Se Goli Mare. 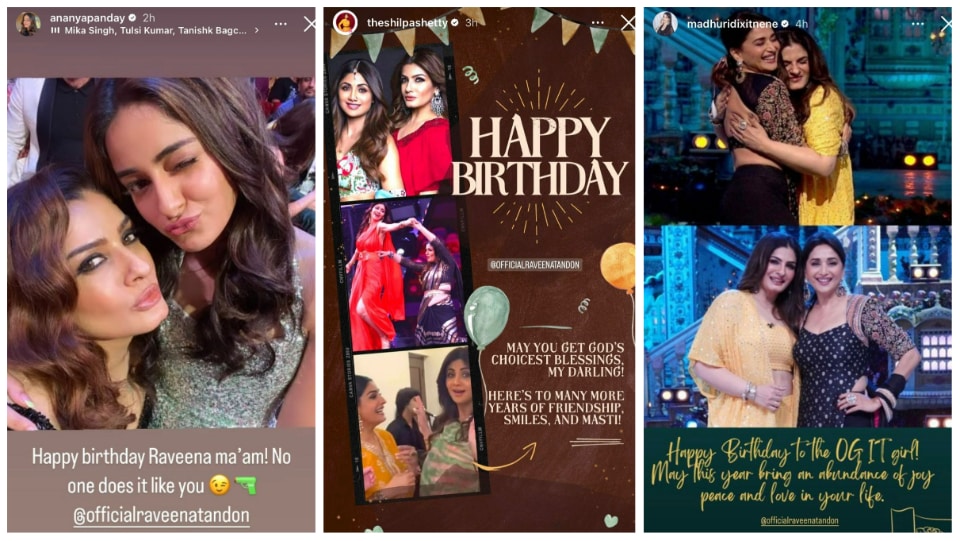 Bollywood diva Madhuri Dixit shared two throwback pictures with Raveena and wrote, “Happy birthday to the OG (original) IT girl! May this year bring an abundance of joy, peace and love in your life. ” In one of the pictures, Raveena decked up in a yellow outfit and hugged Madhuri. In another, Raveena stood beside her and both of them smiled while posing for the camera. Bollywood Actress Shilpa Shetty shared a collage with hers and Raveena’s pictures and wrote, “May you get God’s choicest blessings, my darlings! Here’s to many more smiles and masti (fun)!” One of the pictures showed both of them dancing together on a stage.

Bollywood diva Raveena tied knot with film producer Anil Thadani in 2004. The couple has two children – Rasha and Ranbir Thadani. Before her marriage, in 1995, Raveena had adopted two girls – Pooja and Chaya – when she was only 21. She has starred in several movies such as Dilwale, Laadla, Anari No.1, Bade Miyan Chote Miyan among others.