Sunny Deol is celebrating his 65th birthday today. On this occasion, his younger brother Bobby Deol has wished him a happy birthday through social media. Bobby has shared a photo with Sunny on Instagram.

New Delhi: Famous 90s actor Sunny Deol is celebrating his 65th birthday on 19 October. The actor was born to Dharmendra and Prakash Kaur, a Punjabi Jat family in Sahnewal located in Ludhiana, Punjab. It is said that due to Dharmendra being active in the film industry, his family moved to Mumbai from Punjab.

After Papa, Sunny also stepped into the film world and today he is known for action scenes and heavy dialogues. On this special occasion, veteran celebrities of the film industry are wishing Sunny Paaji a happy birthday. Meanwhile, his younger brother Bobby Deol and close friend Chunky Pandey have also wished the actor a happy birthday through social media.

Bobby Deol has shared a beautiful picture with his “bhaiya” on Instagram. In his birthday note, Bobby Deol simply wrote, “I love you, bhaiya. Happy birthday” and made their fans go aww. He has also picked The Hollies’ He Ain’t Heavy, He’s My Brother as the background music. Several celebrities have dropped wishes for the birthday boy in the comments section. Chunky Panday, who has co-starred with Sunny Deol in many films such as Vishwatma, Lootere and Paap Ki Duniya, wrote, “Happy happy birthday, dear Sunny.” Actor Rahul Dev said, “Happy birthday, Sunny bhaiya.” Actress Esha Gupta left red hearts under the post.

Bobby Deol has also shared a sketch made by one of his fan pages to mark Sunny Deol’s birthday. 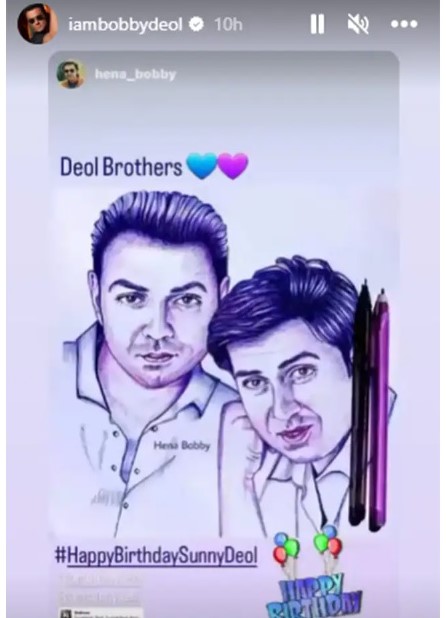 On October 19, 1965, the eldest son was born to Dharmendra and Prakash Kaur. The name was kept Ajay Singh Deol but lovingly started calling him Sunny. This name became so famous that Ajay Singh Deol became Sunny Deol. In Bollywood too, he entered in the name of Sunny. Sunny Deol made her Bollywood debut in 1983 with the film ‘Betaab’. After this film, he gave Hindi cinema superhit films like Gadar Ek Prem Katha, Indian, Ghayal, Ghatak, Border, Betaab.

The Deol brothers have also worked together in a couple of films, including Dillagi, Apne, Yamla Pagla Deewana and Poster Boys.

In terms of Sunny Deol’s upcoming films, he will co-star with son Karan, dad Dharmendra and brother Bobby Deol in Apne 2. The film is directed by Anil Sharma. Earlier this month, Sunny Deol completed the final reading for Apne 2 with Karan. Sunny Deol is also busy shooting for films like Gadar 2 and Fateh Singh.