“Everyday is daughters’ day in my book”: PeeCee shares adorable pictures with Malti and her Dad

Miss world shared a picture collage on her Instagram stories. The first picture happens to be a super cute click of Priyanka with daughter Malti Marie. The second one is throwback picture of Priyanka Chopra with her late father Ashok Chopra. Priyanka Chopra lost her father to cancer in the year 2013. The actress captioned the post: “A day late but its always International Daughters’ Day in my book.” She accompanied the pictured with the song Isn’t She Lovely. 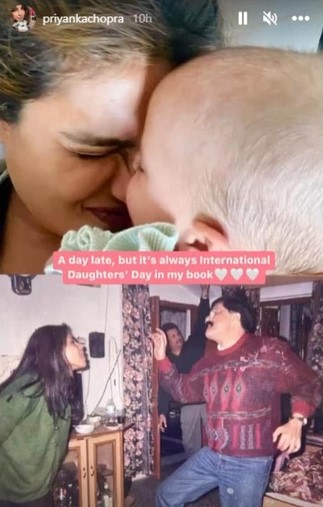 Priyanka Chopra and Nick Jonas welcomed a daughter via surrogacy this year. Priyanka can be seen sitting near the window with Malti in her lap. In a picture, both are seen looking out of the window in the picture, looking at the big buildings of New York and the sky.

Priyanka Chopra and Nick Jonas met at the grand fashion event Met Gala 2017, where they represented designer Ralph Lauren. The singer had shut down an entire Tiffany’s store in New York to pick out Priyanka Chopra’s ring. He had proposed to Priyanka on her birthday while vacationing in London. They got married at the Umaid Bhawan Palace in 2018.

Priyanka Chopra, who was last seen in Matrix 4, will next be seen in Russo Brothers’ Citadel.