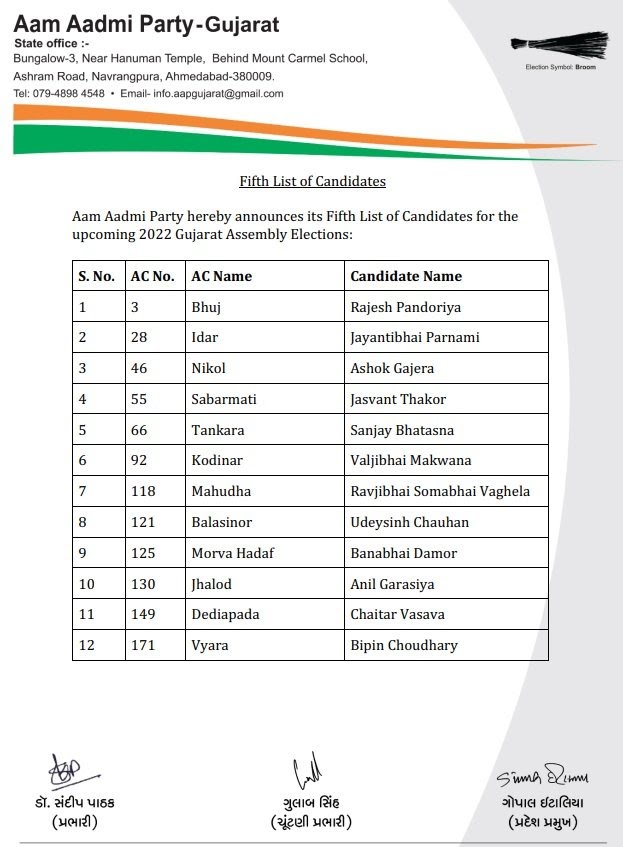 While releasing the list, it was written by tweeting on behalf of the party, AAP Gujarat has released its fifth list of candidates. Gujarat is looking towards AAP with hope for change.

Let us tell you that earlier the party had released the fourth list on 6 October. Tickets of 12 candidates were also announced in the fourth list. The party has so far announced the names of 53 candidates. In today’s list which was released by AAP Gujarat president Gopal Italia, four are reserved for the Scheduled Tribes (STs) and two for Scheduled Castes (SCs). Out of these 12 seats, six are currently held by the Congress, BJP is in five, while one is of Bharatiya Tribal Party (BTP), the Chhotu Vasava-led outfit which recently broke out of AAP.

In the fourth list, Nirmal Singh Parmar, Dolat Patel, Kuldeep Vaghela, Vipin Patel, Bharatbhai Patel, Ramji Bhai Chudasma, Natwar Singh Rathod, Takht Singh Solanki, Dinesh Baria, Shailesh Bhai Bhabhor, Pankaj Tayde, Pankaj Patel have been given tickets. It is worth noting that there are a total of 182 assembly seats in Gujarat, so the magic number of 92 is necessary to form the government.

The Election Commission on Friday announced the election dates for Himachal Pradesh on Friday, and held announcing the dates for Gujarat polls, although conventionally the announcement of election dates of both states are made together, except in 2017. Himachal will go to polls on November 12 in a single phase, and counting will be on December 8.
The tenure of Gujarat Assembly will end on February 18, 2023.