In the case of remission (pardon) to the culprits of Bilkis Bano, the Gujarat government filed an affidavit in the Supreme Court. It was said on behalf of the government that the third party cannot file a case in this matter. Subhashini Ali has nothing to do with this case. Their petition is politically motivated, a conspiracy.

The Gujarat government has said in its affidavit that the state had approved his premature release only under its pardon policy. The 11 people convicted in the case were released from the Godhra sub-jail on August 15 this year.

It was said on behalf of the state government that the third party cannot file a case in this matter. The Gujarat government has said that Subhashini Ali has nothing to do with this case. His petition is politically motivated. It’s a conspiracy. However, the matter will be heard again on Tuesday. 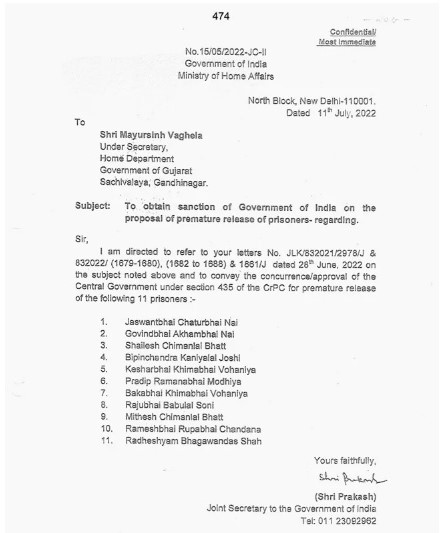 The Gujarat government has raised questions on the filing of the petition by the petitioners (Subhashini Ali, Mahua Moitra). He said in his affidavit that please, challenging the clemency does not come under the jurisdiction of public interest litigation. This is abuse of rights. The Gujarat government has said that the decision was taken to release all the convicts on the basis of the opinion of all the persons involved in the board. In this, the behavior of the culprits during the sentence was also considered.

The state government decided to release the 11 prisoners as the convicts had completed their sentence of 14 years and above in jail and their behavior was found to be good. After the approval of the state government, orders were issued on 10 August 2022 to release the convicts. In this matter, the State Government has also considered the proposals under the 1992 policy directed by this Court. This release happened according to the rules. It is wrong for the petitioners to say that these people were given remission in punishment on the occasion of Amrit Mahotsav of Azadi.

A special CBI court had sentenced 11 convicts to life imprisonment on January 21, 2008 for the gang rape and murder of seven members of Bilkis Bano’s family. Later the Bombay High Court upheld his conviction.