Amidst the torrential rains, the Meteorological Department has predicted heavy rain in Gurugram on Friday as well. In view of the prediction, the district administration has issued an advisory. Yellow alert issues for Today.

Gurgaon: In the midst of torrential rains, the Meteorological Department has predicted heavy rain in Gurugram on Friday as well. Rain water can come on the roads from the drains. Due to the water coming on the road, areas of Delhi-NCR waterlogged. Massive traffic jam on Delhi-Gurugram expressway amid severe waterlogging due to incessant rainfall in Gurugram.

Also Read :- MCD to conduct clean drive to roads for 15 days ahead of G-20 summit

Therefore, the district administration has issued an advisory in view of the forecast issued by the Meteorological Department. In the issued advisory, it has been said that people may have to face problems due to traffic jams. Therefore, in view of the problem, the employees are being asked to do work from home. The district administration has advised private institutions and offices to send messages to the employees regarding work from home. 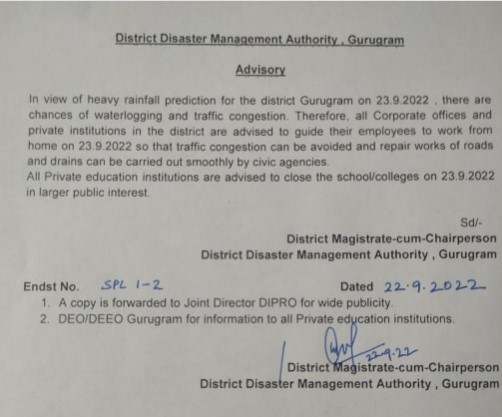 Let us tell you that due to continuous heavy rains in Gurugram, there is waterlogging in some places. There was a long line of vehicles on the road. Police personnel were seen trying to clear the jam. Waterlogging caused trouble in Mayfield Garden, Besai Chowk, AIT Chowk, Atlas Chowk, CRPF Chowk and Sector 10-A. More than a thousand police personnel were deployed across the city after the rains started on Thursday morning.

“In view of heavy rainfall prediction, there are chances of waterlogging and traffic congestion. Therefore, all corporate offices and private institutions in the district are advised to guide their employees to work from home so that traffic congestion can be avoided,” the Gurugram disaster management authority said in its advisory.

I love the rains, but this is taking it a bit too far!! Welcome to #rains in #Gurugram and clogged roads! @TOIGurgaon pic.twitter.com/TOnbFWsekv

Gurugram receives 54 mm rainfall
As per updates from the district administration, Gurugram on Thursday received 54 mm of rainfall, with Wazirabad receiving the maximum 60 mm. The rainfall in Manesar was recorded at 50 mm, Sohna 43 mm, Harsar 54 mm, Badshahpur 30 mm, Pataudi 20 mm and Farrukhnagar 29 mm till 5 pm.

Also Read :- After Amul, now Parag company has also increased the price of milk, new rates are applicable from today

All schools and colleges have also been advised to stay closed.

The fresh spells of rains just before the withdrawal of monsoon from the National Capital Region will help cover the large deficit (46 per cent till September 22 morning) to some extent. It would also keep the air clean and the temperature in check.

Also Read :- Former Pakistan Army Chief and President Pervez Musharraf passes away at the age of 79