Also Read :- HP Assembly Election 2022: PM Modi stops his convoy to give way to an ambulance in Chambi 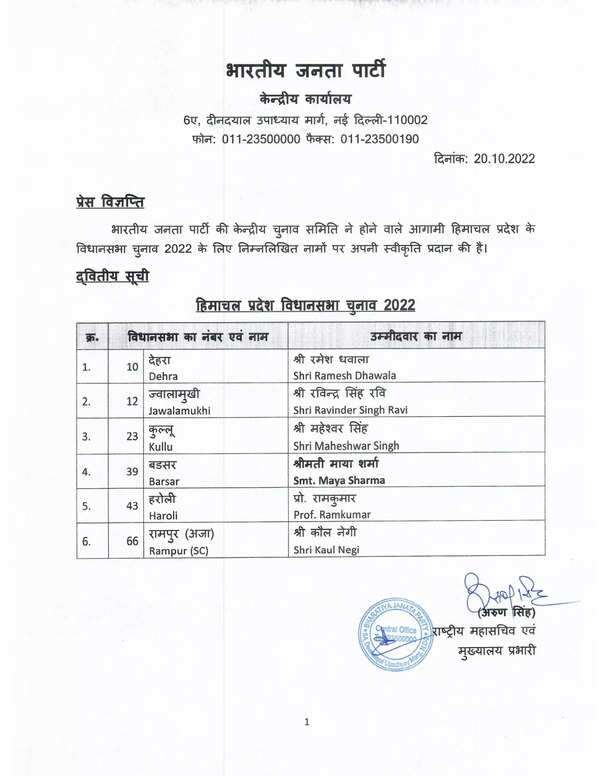 The new list includes the names of Ramesh Dhawala from Dehra, Ravindra Ravi from Jwalamukhi. Along with this, Maheshwar Singh has been fielded from Kullu, Maya Sharma from Barsar, Professor Ramkumar from Haroli and youth leader Kaul Negi from Rampur. Earlier on Wednesday, BJP released the first list of 62 candidates. Chief Minister Jai Ram Thakur will once again contest from Siraj assembly constituency.

BJP has not given ticket to former Chief Minister Prem Kumar Dhumal in this election. The party has fielded Captain (Retd) Ranjit Singh from Sujanpur seat in his place. In the last assembly elections, Dhumal was defeated in this seat by Rajendra Rana, considered a strong leader of the Congress. After the defeat of Dhumal, the BJP decided to make Jai Ram Thakur as the Chief Minister.

Former BJP state president Satpal Singh Satti will once again try his luck from Una. He had to face defeat in the last assembly elections. He was defeated by Satpal Singh Raizada of Congress.

Assembly elections are to be held in Himachal Pradesh on November 12. The counting of votes will take place on December 8. In the state assembly, the BJP currently has 43 members while the Congress has 22 members. There are two independent members and one member of the CPI(M) in the house. There is likely to be a direct contest between the BJP and the Congress in the state. The Aam Aadmi Party (AAP) is also trying to make its presence felt here.