New Delhi: BJP has released its first list of candidates for Himachal Pradesh elections. The names of 62 candidates have been announced by the BJP in its first list. CM Jairam Thakur will contest from Seraj. The contest on this seat is considered to be very interesting, because Congress has already declared Chetram Thakur as its candidate from here. After which now BJP also formally announced the name of CM Jairam Thakur. 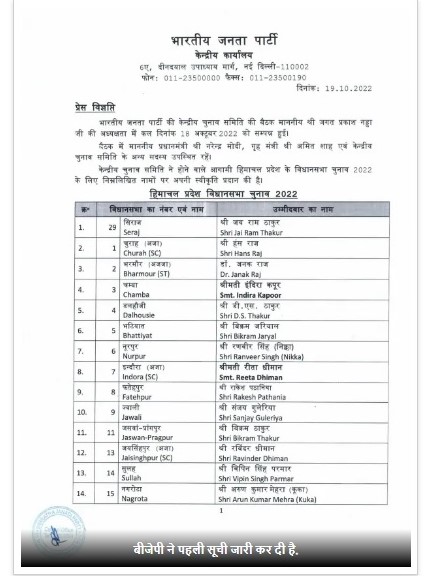 A five-time MLA, Thakur will contest for the seventh time in the state polls which is slated to take place on November 12.

BJP has nominated five women candidates in its first list of 62 candidates. Apart from CM Jairam Thakur, BJP has given ticket to Anil Sharma from Mandi, while Pawan Kajal has been nominated from Kangra.

Let us inform that a few days ago the dates of Himachal Pradesh elections were announced. Voting will be held in Himachal on November 12. After which the results will be out on 8 December.

Some incumbent MLAs have been dropped.

Assembly polls in the State have been scheduled for November 12 and the last date for filing nominations is October 25.