Prime Minister Narendra Modi's mother Heeraben has been taken to UN Mehta Hospital in Ahmedabad. This year in June Heeraben turned to 99.

Ahmedabad: Prime Minister Narendra Modi’s mother Heeraben, on Wednesday (December 28), was admitted to UN Mehta hospital in Ahmedabad as per news reports. Heeraben who turned 99 in June this year has faced health issues. As per reports, PM Modi’s mother was taken to the hospital after her health deteriorated.

The hospital issued a statement saying that her condition is stable. 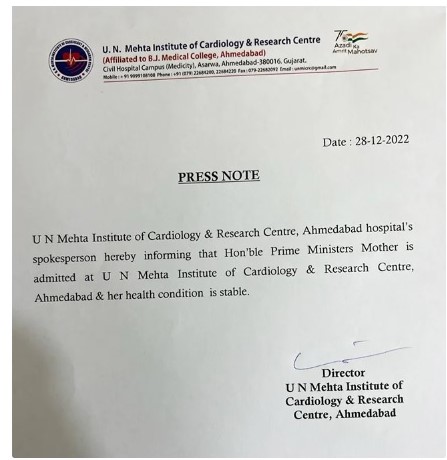 PM Modi had earlier met her at her residence in Gandhinagar after he campaigned for the Gujarat Assembly elections. He had visited her to seek her blessings before the polling days.