Global Icon Priyanka Chopra recently shared a story on Instagram, in which she shared the joy of coming back to India with her fans. This would be Priyanka Chopra's first trip to India after the birth of her daughter Malti Marie

New Delhi: Priyanka Chopra is such an actress of Bollywood, who always remains in the headlines. Recently, the actress has once again caught all the attention of her fans with her Instagram story. Yes, in fact, global actress Priyanka Chopra is coming to India soon. This happiness actress has shared with her fans through social media. The actress has also shared the reason for her happiness. Let us tell you that Priyanka is coming back to her home after almost three years. This is the reason why he is very excited.

Priyanka Chopra has shared a picture on her official Instagram. The actress has shared the photo of the boarding pass. Along with this, it is written in the caption that I am finally going home… After almost three years… Let us tell you that this trip is also special for Priyanka because this is the first time after Kovid 19 that Actress India is going to her home.
. 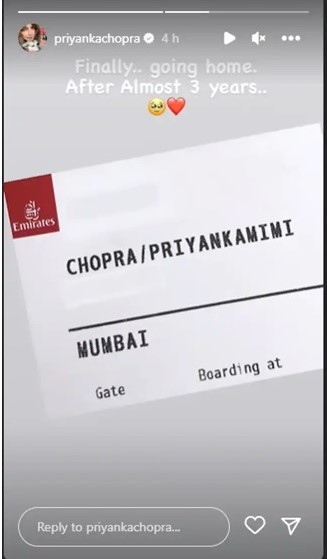 Meanwhile, Priyanka Chopra and Nick Jonas celebrated Diwali at their house in Los Angeles with their family and friends, including Priyanka’s mom Madhu Chopra. It was their daughter Malti Marie’s first Diwali. The actress shared adorable pictures from the festivities in which the family of three can be seen in similar traditional outfits.

In the caption, she wrote, “Love, peace and prosperity to all. From a heart truly laden with gratitude, I wish you all a Happy Diwali. Sorry I’m a little late but decided to stay in the moment just a little bit longer…From ours to yours. Love and light” Check out the post below:

Also Read :- "Everyday is daughters' day in my book": PeeCee shares adorable pictures with Malti and her Dad

The duo welcomed their daughter through surrogacy earlier this year in January.

On the work front, Priyanka Chopra has several projects in her kitty – It’s All Coming Back To Me, Russo Brothers’ Citadel and Farhan Akhtar’s Jee Le Zaraa, co-starring Katrina Kaif and Alia Bhatt.