IMD warns of heavy rain in many parts of the state. In view of this, Bulandshahr, Hapur, Kanpur and Agra DMs have ordered closure of schools for two days. Cities including Lucknow, Noida, Ghaziabad shut schools for all children up to class XII owing to a warning of heavy rainfall issued by the weather department for October 10.

Also Read :- MP: Class 5 Girl paraded with garland of shoes in hostel on suspicion of theft

“Cities including Lucknow, Noida, Gaziabad, Kanpur & Agra shut schools for all children up to class XII owing to a warning of heavy rainfall issued by the weather department for Oct 10. The state has already been witnessing incessant rainfalls in the past few day,” according to sources. 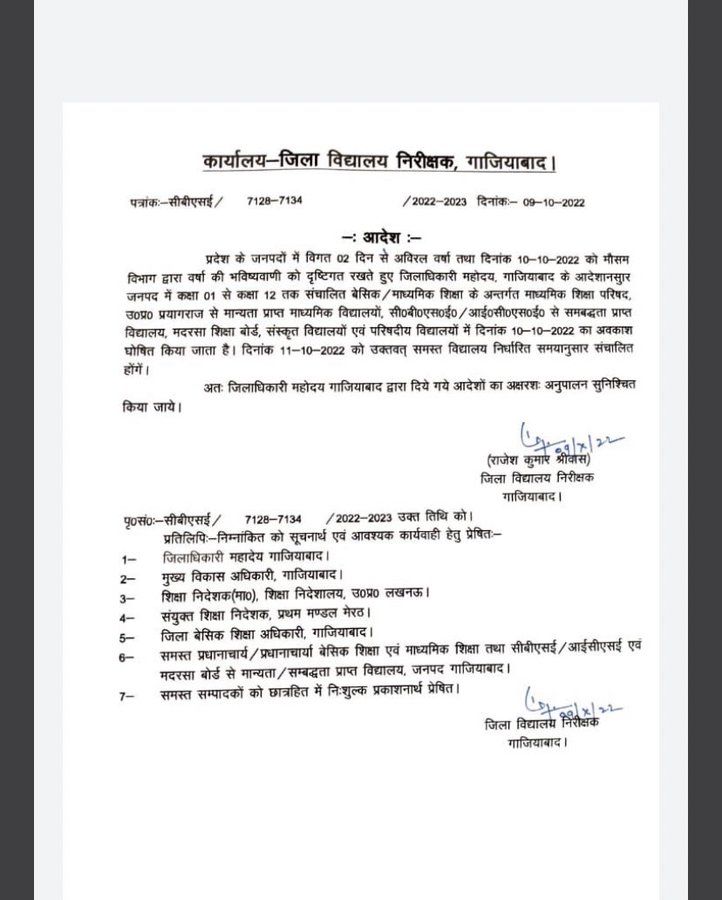 The effect of heavy rains is continuously visible in UP. The effect of rain is most visible in western UP. Seeing the effect of heavy rains in Bulandshahr, DM Chandra Prakash Singh has issued an order for holiday in schools for the next two days. It has been decided to close classes from class one to class 12 in the district. The DM has declared a holiday on October 10 and 11 in all government and private schools. In the order issued, it has been said that strict action will be taken against those who violate the order of DM.

Also Read :- UP: Woman declared 'dead' years ago found alive by mother of her 'murder' accused

Earlier today, the UP Government had ordered closer of all schools in Aligarh till Class 12 due to the heavy downpour in past 24 hours. The schools will remain closed till October 12. District Magistrate Indra Veer Singh announced the decision, which covers all schools affiliated to AMU, through a statement.