Tamil Nadu: Several flights were cancelled at Chennai airport on 9th December due to cyclone Mandous

Tamil Nadu News: Due to bad weather in Tamil Nadu, many flights have been canceled at Chennai airport on 9th December.

In the view of cyclonic storm, the Greater Chennai Corporation (GCC) has asked people not to venture near the beaches of Chennai and has closed all the corporation parks citing heavy rainfall due to cyclone Mandous. Issuing a statement, GCC announced that parks and playgrounds across Chennai will be closed till the next announcement. 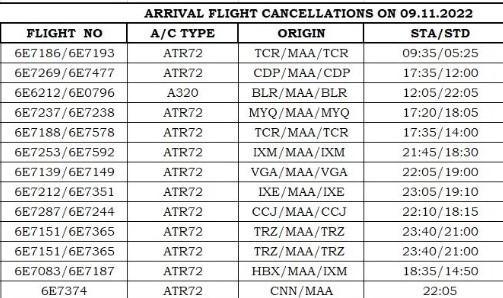 Besides, the Greater Chennai Corporation has already put in place rescue workers, including the NDRF teams to handle any emergency situation arising out of the cyclonic storm that is likely to touch the land by Friday night.

Cyclone Mandous is very likely to cross on December 9 midnight with maximum wind speed of 65-75 kmph gusting to 85 kmph. The Indian Meteorological Department said that the cyclonic storm is currently located 240 km east-southeast of Karaikal over the southwest Bay of Bengal. Mandous will cross the coast of North Tamil Nadu, Puducherry and South Andhra Pradesh with a speed of 65-75 kmph gusting to 85 kmph.

Also Read :- Pakistan: Two vehicles plunged into ravine after colliding with each other in Khyber Pakhtunkhwa; 30 Killed, 15 injured

Schools and colleges remained closed today in 12 districts including Chennai, Tiruvallur, Chengalpattu, Vellore, Ranipettai and Kanchipuram in view of heavy rain warnings. Light to moderate rains have been lashing the northern part of the state since last night. Heavy rains have also occurred in some parts.