Popular TV actress Tunisha Sharma allegedly died by suicide on the sets of a TV serial last Saturday. The news of Tunisha Sharma's suicide surprised everyone. Today Tunisha will be cremated. The last rite of the actress will be held at 3 o'clock today in Mira road in Mumbai.

Mumbai: Popular TV actress Tunisha Sharma allegedly died by suicide on the sets of a TV serial last Saturday. The news of Tunisha Sharma’s suicide surprised everyone. Today Tunisha will be cremated. The last rite of the actress will be held at 3 o’clock today in Mira road in Mumbai.

Also Read :- Cricketers Babar Azam, Shahid Afridi among others moved to safety after explosion near stadium in Quetta

Tunisha will be cremated at the cremation ground on Mira Road in Mumbai. In the Tunisha suicide case, the police is probing from every angle. Everyday new updates are coming out from Tunisha suicide case. Tunisha’s co-actor Sheezan Khan has been arrested following a complaint by the actress’s mother Vanita.

Last night she had come to see her daughter’s body at the hospital. She fainted on seeing her daughter. When she was seen outside the hospital, she could not even stand on her own. On the other hand, accused Sheezan has told the police that he and Tunisha had a breakup within three months. There was also an age gap between the two. 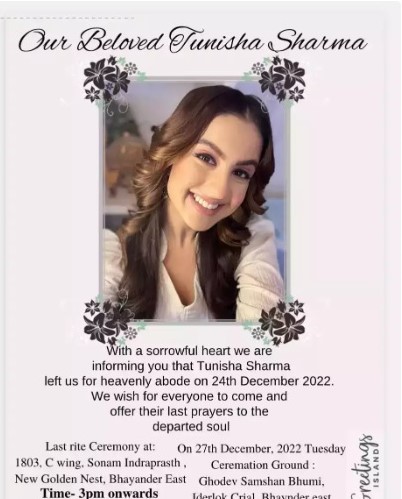 Tunisha’s family issued a statement saying, “Our beloved Tunisha Sharma. With a sorrowful heart we are informing you that Tunisha Sharma left us for heavenly abode on 24th December 22. We wish for everyone to come and offer their last prayers to the departed soul.” Her cremation will take place at Mira Road cremation ground. The last rites ceremony will begin at 3 pm in Bhayander East.

In police interrogation, Sheejan is making revelations about Tunisha and their relationship. On the other hand, on Monday, the police have so far recorded the statements of 17 people, including close friends and relatives of the actress. Tunisha’s death has left her mother heartbroken.