Veteran filmmaker-director Rakesh Kumar has passed away. He was 81 years old. According to reports, the director breathed his last on 10 November 2022. A prayer meeting in his memory will be held today on 13th November.

New Delhi: Veteran filmmaker-director Rakesh Kumar has passed away. He was 81 years old. According to reports, the director breathed his last on 10 November 2022. He is survived by his wife, a son and a daughter. According to reports, filmmaker Rakesh Kumar was battling a dangerous disease like cancer for some time. His family has organized a prayer meeting on 13 November 2022 between 4 to 5 pm. 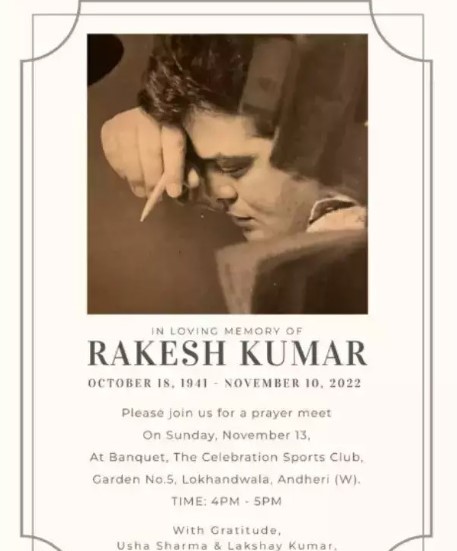 His fans have become quite disappointed as soon as this news comes to the fore. Rakesh Kumar is credited with ‘Khoon Pasina’, ‘Do Aur Do Paanch’, ‘Mr Natwarlal’, ‘Yaarana’, ‘Johnny I Love You’, ‘Dil Tujhko Diya’, ‘Kaun Jeeta Kaun Hara’, ‘Commander’ and ‘Sooryavanshi’. ‘ (1992) is known for such films. Out of these films, he also produced ‘Dil Tujhko Diya’, ‘Commander’, and ‘Kaun Jeeta Kaun Hara’.

Let us tell you that Rakesh Kumar is known for his films Mr. Natwarlal (1979), Do Aur Do Paanch (1980) and Sooryavanshi (1992). Amitabh Bachchan was seen in Mr. Natwarlal and Salman Khan worked in Suryavanshi. He also acted in films like ‘Dil Bechara Pyaar Ka Mara’, ‘Desh Videsh’ and ‘Dil Pe Mat Le Yaar’.